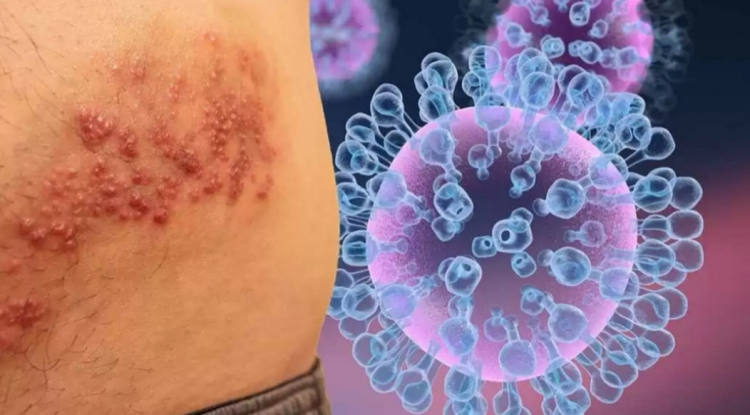 Monkeypox is a viral zoonosis (a disease caused by viruses transmitted from animals to people), which produces symptoms similar to those seen in smallpox patients in the past, although less severe. With the eradication of smallpox in 1980 and the subsequent cessation of smallpox vaccination, monkeypox has become the most important orthopoxvirus public healthcare deals with. Monkeypox occurs mainly in central and western Africa, often near tropical forests, although its presence is increasing in urban areas. Animal hosts include a variety of rodents and primates.

Monkeypox virus is an enveloped double-stranded DNA virus that belongs to the genus Orthopoxvirus of the family Poxviridae. There are two distinct clades of the virus, namely the Central African (Congo Basin) clade and the West African clade. Throughout history, cases caused by the Congo Basin clade have been more severe and thought to be more easily transmitted. The geographical divide between the two clades has so far been in Cameroon, the only country where both clades of the virus have been found.

Several animal species susceptible to monkeypox have been identified, including chipmunks, tree squirrels, Gambian rats, African pygmy dormouse, non-human primates, and other species. The natural history of monkeypox remains uncertain, and further studies are needed to identify the exact reservoir of the virus and how it circulates in nature.

Since 1970, human cases of monkeypox have been reported in 11 African countries: Benin, Cameroon, Central African Republic, Democratic Republic of the Congo, Gabon, Cote d'Ivoire, Liberia, Nigeria, Republic of the Congo, Sierra Leone, and South Sudan. The severity of this disease remains unknown. For example, in 1996-1997 an outbreak was reported in the Democratic Republic of the Congo with a low case fatality rate and a higher than usual incidence rate. A simultaneous outbreak of varicella (caused by varicella virus, which is not an orthopoxvirus) and monkeypox was detected which could explain the real or apparent changes in transmission dynamics observed in this case.

Starting from 2017, Nigeria has experienced a massive outbreak, with more than 500 suspected cases and more than 200 confirmed cases, and a case fatality rate of about 3%. To this day, cases continue to be reported.

Monkeypox is a major global public health issue, affecting not only countries in West and Central Africa, but also the rest of the world. In 2003, the first outbreak of monkeypox outside of Africa occurred in the United States of America (USA) and was linked to contact with infected prairie dogs. These pets had been housed with Gambian rats and African dwarf dormice that had been imported from Ghana. This outbreak caused more than 70 cases of monkeypox in the US, a disease that has also been reported in people who traveled from Nigeria to Israel in September 2018, to the UK in September 2018, December 2019, May 2021 and May 2022, to Singapore in May 2019, and to the US in July and November 2021. As of May 2022, multiple cases of monkeypox were identified in several non-endemic countries. Studies are currently underway to better understand the epidemiology, sources of infection, and characteristics of transmission.

The figures of the number of infected people by this virus are variable, because of that the number of people with this disease daily increases. 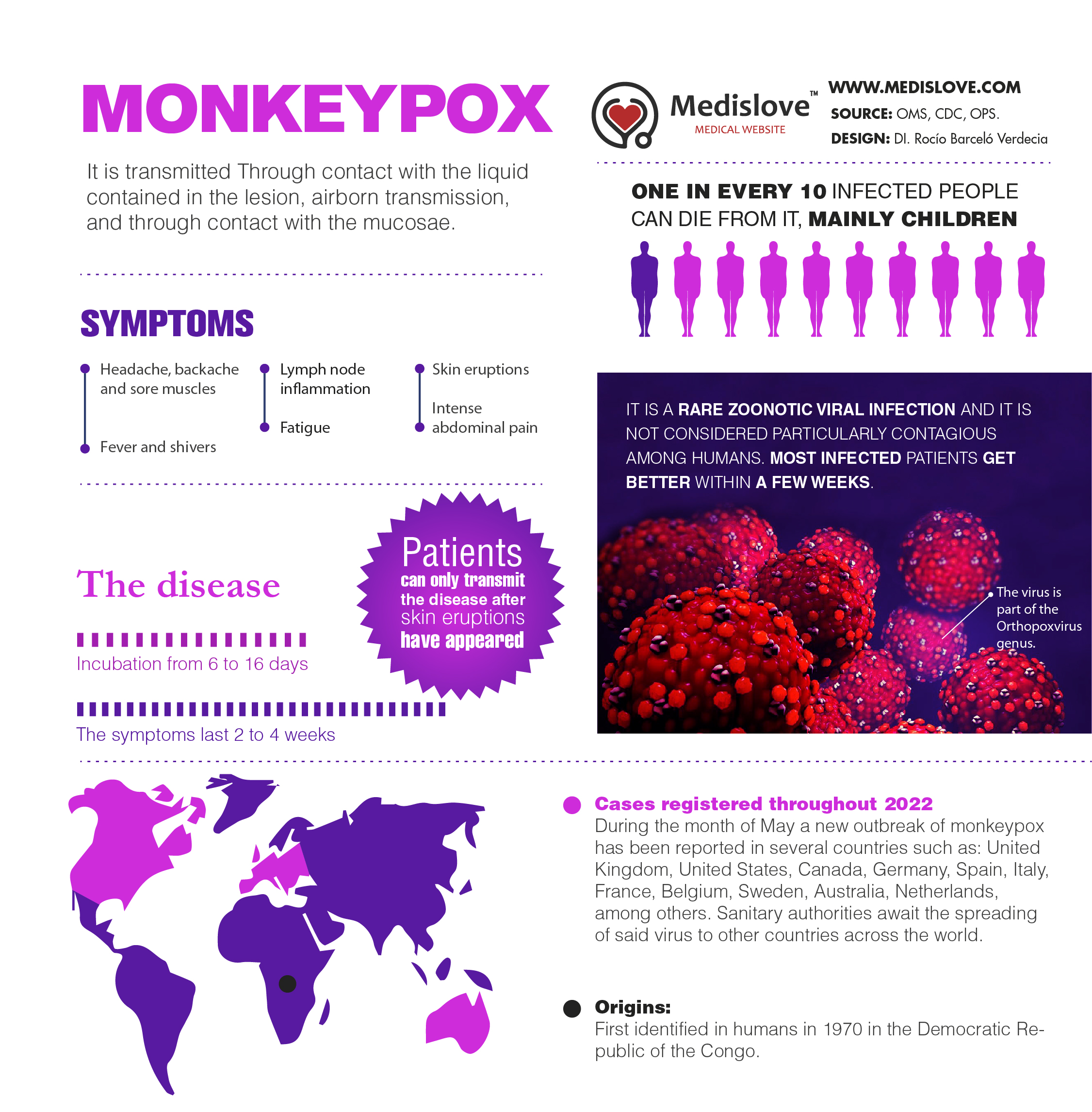 Animal-to-human transmission (zoonosis) occurs through direct contact with blood, body fluids, skin or mucosal lesions of infected animals. In Africa, evidence of monkeypox virus infection has been found in many animals, including chipmunks, tree squirrels, Gambian rats, African pygmy dormice, different species of apes, and others. Although the natural reservoir for monkeypox is yet to be identified, rodents are the most likely option. Eating undercooked meat and other animal products from infected animals is a possible risk factor. People who live in or near forested areas may experience low-level or indirect exposure to infected animals.

Person-to-person transmission can occur through close contact with respiratory secretions or skin lesions from an infected person, or with recently contaminated objects. Transmission via respiratory droplets often requires prolonged face-to-face contact, increasing risk for health care professionals, household members, and other close contacts of active cases. However, the longest documented chain of transmission in a community has increased in recent years from six to nine successive person-to-person infections. This may be a reflection of decreased immunity in all communities due to cessation of smallpox vaccination. Transmission can also occur through the placenta from mother to fetus (which can lead to cases of congenital monkeypox) or through close contact during and after birth. Although close physical contact is a well-known risk factor for transmission, it is unclear at this time whether monkeypox can be transmitted specifically through sexual intercourse. Studies are needed to better understand this risk.

The incubation period (interval between infection and onset of symptoms) for monkeypox is usually 6 to 13 days, although it can range from 5 to 21 days.

The infection can be divided into two periods:

Monkeypox is usually a self-limited disease, with symptoms lasting 2 to 4 weeks. Severe cases occur more frequently in children, and their course depends on the degree of exposure to the virus, the patient's health status, and the nature of the complications. Underlying immune deficiencies can cause worse outcomes. Although vaccination against smallpox conferred protection in the past, today people under 40 to 50 years of age (depending on the country) may be more susceptible to monkeypox due to the cessation of smallpox vaccination campaigns worldwide after the eradication of the disease. Complications of monkeypox can include secondary infections, bronchopneumonia, sepsis syndrome, encephalitis, and corneal infection with consequent loss of vision. The incidence rate of asymptomatic infections is unknown.

When making the differential diagnosis, the elements that differentiate it from other rash diseases such as chicken pox, measles, bacterial skin infections, scabies, syphilis and drug allergies should be taken into account. Lymphadenopathy in the prodromal phase of the disease may be a clinical manifestation that helps differentiate this disease from chickenpox or smallpox.

When suspecting this condition, health professionals should obtain an adequate sample and send it in safe conditions to a laboratory that has the appropriate means. Confirmation of monkeypox depends on the type and quality of the sample and the type of laboratory test performed. The samples, therefore, must be packaged and shipped in accordance with national and international requirements.

Due to the accuracy and sensitivity it offers, the indicated laboratory test is the polymerase chain reaction (PCR). The ideal samples to diagnose monkeypox with this technique are those taken from skin lesions: roof or fluid from vesicles and pustules, as well as dry scabs. When feasible, biopsy is another option. Lesion samples should be stored in a dry, sterile tube (without means of viral transport) and kept refrigerated. PCR tests performed on blood samples are often inconclusive because the viremia is too recent at the time the samples are taken after the onset of symptoms; for this reason, it is not advisable to routinely draw blood from patients.

Since orthopoxviruses are serologically cross-reactive, antigen and antibody detection methods do not provide specific confirmation of monkeypox. Therefore, the use of serologic and antigen detection methods for diagnosis or case investigation is not recommended when resources are scarce. Also, recent or previous vaccination with a vaccinia virus (for example, anyone vaccinated before smallpox eradication, or recently vaccinated due to increased risk, such as laboratory personnel working with orthopoxviruses) could lead to false-positive results.

In order to interpret the test results, it is essential that patient information is provided along with the samples, such as: a) date of onset of fever, b) date of onset of rash, c) date of sample collection, d) current state of the individual (stage of eruption) and e) age.

Recommendations in case of symptoms or high risk of transmission

Have you had a positive test for monkeypox?

Are you part of a group at high risk of infection or have you just returned from a trip to an area at risk (West and Central Africa)?

We recommend the following:

Clinical care for monkeypox should be oriented towards relieving symptoms, controlling complications, and avoiding long-term sequelae. Fluids and food should be offered to patients to maintain adequate nutritional status. Secondary bacterial infections should be treated as indicated. In 2022, following the analysis of data obtained from animal and human studies, the European Medicines Agency (EMA) authorized the use for monkeypox of an antiviral called tecovirimat, which had been developed for smallpox. It is not yet widely available.

When used for patient care, ideally tecovirimat administration should be supervised in a clinical investigation setting with prospective data collection.

Raising awareness of risk factors and educating people about the steps they can take to reduce exposure to the virus is the main prevention strategy for monkeypox. Scientific studies are underway to assess the feasibility and suitability of vaccination for the prevention and control of monkeypox. Some countries have or are developing policies to offer vaccines to people who may be at risk, such as laboratory personnel, rapid response teams, and health workers.

Reducing the risk of person-to-person transmission

Surveillance and rapid detection of new cases are essential to contain epidemic outbreaks. During monkeypox outbreaks, close contact with other infected people is the most important risk factor for infection. The risk of infection is higher for healthcare workers and household members. Healthcare workers caring for patients with suspected or confirmed monkeypox virus infection, or those who handle samples from these patients should follow standard infection control precautions. If possible, individuals previously vaccinated against smallpox should be selected to care for the patient.

Samples from people or animals suspected of being infected with monkeypox virus should be handled by trained personnel working in properly equipped laboratories. Patient samples must be safely prepared for transport with triple packaging in accordance with the WHO guidelines for the transport of infectious substances.

The identification, in May 2022, of clusters of monkeypox cases in several non-endemic countries without direct travel links to an endemic area is rare. Further investigations are underway to determine the likely source of infection and limit further spread. While investigating the source of this outbreak, it is important to examine all possible modes of transmission to safeguard public health.

Relationship Between Monkeypox and Smallpox

The clinical picture of monkeypox resembles that of smallpox, a related Orthopoxvirus infection that was declared eradicated worldwide in 1980. Smallpox was more easily transmitted and more frequently fatal, with about 30% of the patients dying. The last case of naturally acquired smallpox occurred in 1977 and, following a worldwide campaign of vaccination and containment, in 1980 smallpox was declared eradicated worldwide. It has been 40 years or more since all countries stopped routinely vaccinating against smallpox with vaccinia virus. Since vaccination also protected against monkeypox in West and Central Africa, unvaccinated populations are also now more susceptible to monkeypox virus infection.

The health sector all over the world remains vigilant to detect a possible reappearance through natural mechanisms, laboratory accidents or intentional release. To ensure global preparedness in the event of a smallpox resurgence, new vaccines, diagnostic tests, and antivirals are being developed, all of which may also be useful in the prevention and control of monkeypox. 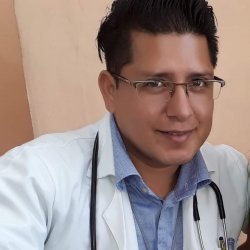 🔹Medical graduate from The University of Medical Sciences of Havana, Cuba.
🔹Specialist in Intensive Care and Emergency.
🔹Director of the Teaching and Research Department of the "Fray Quebracho" Hospital.
🔹Professor of the University of Maimónides. Buenos Aires. Argentina.
🔹Member of the International Fluid Society.
🔹Member of the Panamerican Trauma Society.
🔹International Lecturer. 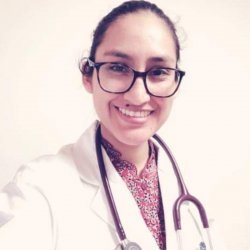 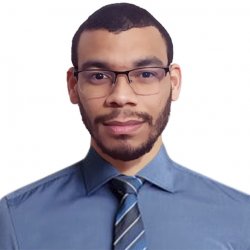 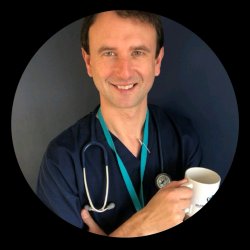 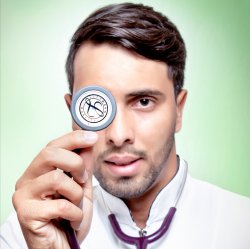