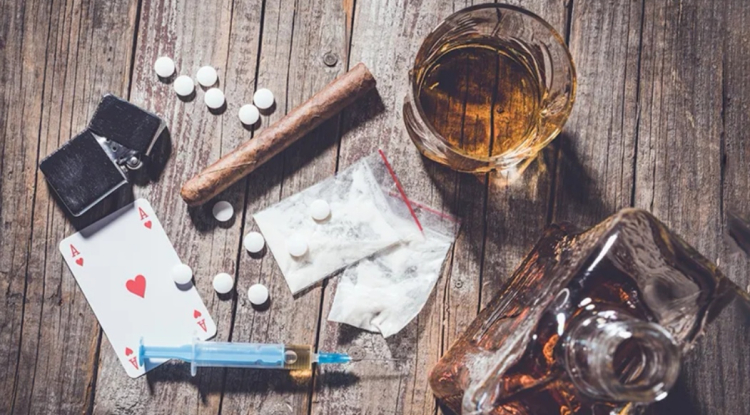 Addiction: A disease-generating lifestyle that damages the human being in his biological, psychological, social, familial, occupational, and spiritual unity.

Dependence: (Clinical criteria as per DSM-V, the Diagnostic and Statistical Manual of Mental Disorders). Unmanageability = Subjugation or loss of freedom in the face of the substance.

Addiction = Impulse due blockage of the cerebral cortex that happens when drugs are consumed and only the subcortex remains working, giving way to impulses.

Dependency = Lack or loss of emotional or spiritual control and familial, social and personal functionality.

Classification of drugs according to their effects on the Nervous System

Drug use generates tolerance and withdrawal, but these are not sufficient criteria to diagnose addiction, for which one also needs to meet the dependency criterion (DSM-V Clinical Criteria).

Withdrawal: The signs, symptoms and discomforts that appear when you stop consuming a certain substance or its effects pass. These are avoided by consuming it again, since the body and mind, already dependent on the drug(s) demand them.

Pathways of entry and maintenance to addictions

Sociocultural Way: Through macrosocietal permissiveness towards the consumption of legal and illegal substances, which are given indiscriminate publicity and propaganda through the mass media, cultural customs associated with wine consumption, stereotypes and myths such as "men must drink"; and the microgroups including family, friends, colleagues and neighbors. This is a product of the customs, traditions and conventions of different cultures, it is closely related to the pressure exerted by big or small social groups. An example would be an adolescent who says yes to drugs to demonstrate "boldness" to his peers who, in their immaturity, underestimate him for not "having been initiated". Paradoxically, that same group during their adulthood will reject those who have not been able to free themselves from the drug as "weak or slow".

Hedonic Way: (from hedonism or pleasure Vs anhedonia), associated with consumerism. Although it’s closely linked to the first way, it is characterized by the search for "pleasure" being the most important motivation for repeated consumption, without realizing that those minutes of artificial "pleasure" will turn into decades of suffering for the addict and their loved ones. This way is the most important in patients with dissocial traits prior to addiction.

Assertive Way: Disinhibition, self-affirmation of security and confidence. It refers to the use of the substance as a crutch to face situations that are feared to some degree or cause insecurity or anxiety; it frequently happens to shy people.

Evasive Way: Avoid problems via consumption and "drown sorrows in alcohol". It has been highly emphasized in scientific literature to the point of considering it as the most relevant. It is the attempt to "drown" present or past sorrows of conscious or unconscious nature.

Symptomatic way: Relief of symptoms resulting from other diseases, comorbidities and dual diagnoses. Where there is an underlying condition, usually a psychiatric one such as depression, mania, obsessions, phobias and others.

Constitutional or Genetic Way: Genetics or biological inheritance, which is influential but not determinative; and environmental inheritance, through families tolerant to substances, learning processes, modeling, imitation and identification. It is the most questioned and must be taken into account carefully in subjects who present both a family history of drug addicts and an early onset, in the absence of other hegemonic pathogenic mechanisms nor dissocial tendencies.

It is a set of physiological, behavioral and cognitive manifestations in which the consumption of a drug, becomes the highest priority for the individual, even greater than any other type of behavior that in the past had the highest value. The main manifestation of the dependency syndrome is the strong and sometimes insurmountable desire to ingest psychotropic substances including those prescribed by a doctor. Relapse into substance use after a period of abstinence leads to more rapid onset of the rest of the syndrome's features than when it happens in non-dependent individuals.

The diagnosis of dependency should only be made if three or more of the following features have been present at any time in the previous twelve months or on an ongoing basis:

Stages or phases of addictive disease related to disease awareness

The four cardinal signs of addiction

1.1. Obsession - compulsion. Addictive behavior is often compelling and exhausting. When one is addicted to something, they often can't stop thinking about it and planning their next use. When the time to consume the substance they’re addicted to approaches, they experience anxiety and excitement that will not subside until they’re done, the obsession will take much of their time, energy and attention.

2. Lack of Control. If you have acquired an addiction, you will usually be unable to control or stop the corresponding behavior once you have started (drank the first shot), with seeming ungovernability or subjugation and loss of freedom in the face of the substance (dependence). Despite all your good intentions or promises you can make to yourself and others. The distinctive feature of addictive behavior is that in trying to control it, the force of will is not enough! The substance or activity in question is controlling you, instead of you having control over its use.

3. Denial. Immature defense mechanisms are the mind's way of controlling attention and the trauma of having a long-term illness. Denial is a fictitious mental process, denying your own addiction and its consequences, that is, being out of touch with reality. Rationalization, intellectualization, minimization, displacements of the disease express rupture with objective reality through ideo-affective-conative dissociation, which can manifest as micropsychosis (alterations of the thought process). It can be expressed through the minimization the substance and its consequences, comparisons with other consumers or people or by absolute denial.

4. Negative consequences in all biopsychosocial dimensions.

If you think you are not on the right path, before making a bad decision, STOP! Seek family support and specialized health professionals. 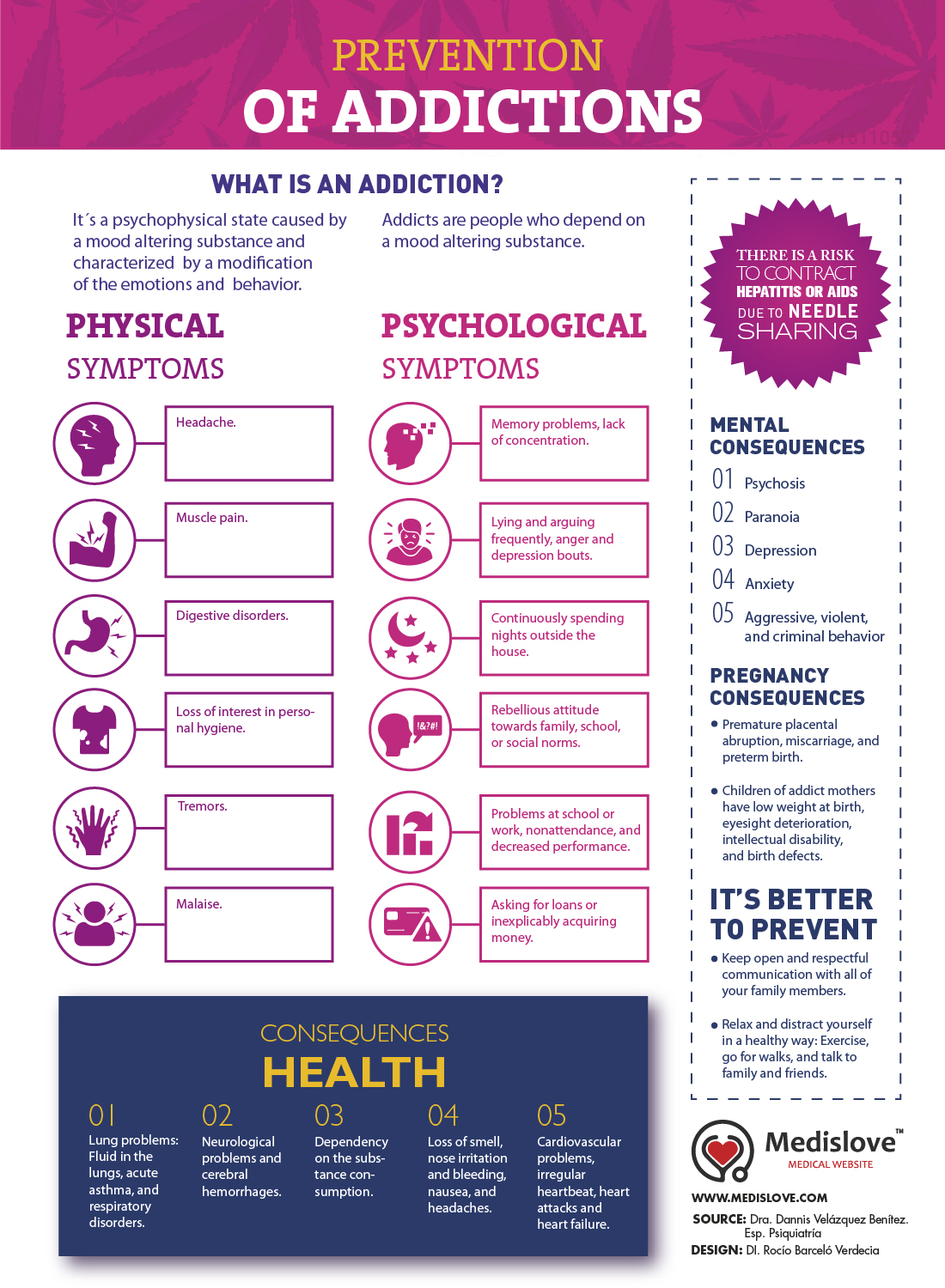 What is polycystic kidney disease?

What are boils and how are they treated? 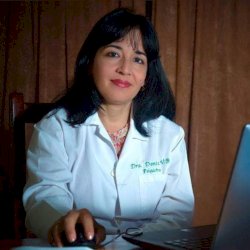 🔹Medical graduate from The University of Medical Sciences of Havana (UCM-H), Cuba.
🔹Specialist in Psychiatry.
🔹Specialist in the treatment of mental disorders associated with substance use, abuse and dependency.
🔹Twenty ( 20 ) years of experience treating patients from over 57 countries and with all kinds of disorders, and their families.
🔹Undergraduate and graduate Adjunct Professor.
🔹Medical Director of the International Therapeutic Community Villa Quinque-Cocal in Cuba.
🔹General Director of the Clinical-Surgical Hospital Carlos E. Font Pupo in Cuba.
🔹International consultant for addiction treatment.
🔹Lecturer on multiple international congresses, events, and international health tourusm fairs.
🔹Currently a psychotherapist in the Personal Development, Rehabilitation and Anti-stress Center DV-Benítez in Chile.