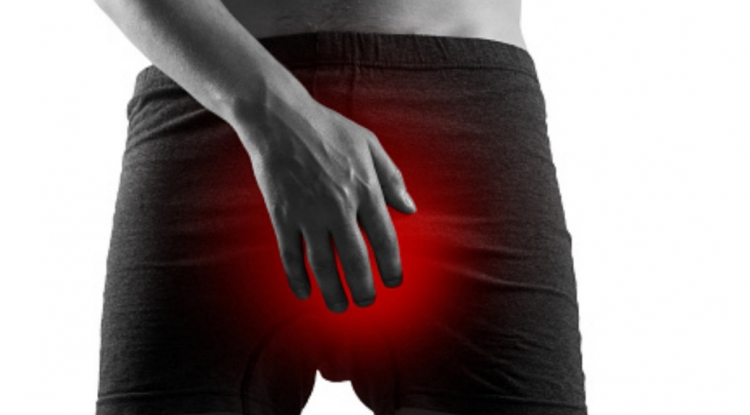 Penile trauma constitutes an infrequent entity within urology emergencies. In fact, severe cases have an approximate incidence of one case per every 175,000 cases admitted into the urology department. Just like the injuries of other organs, it can be classified as open and closed, depending on whether there is a breach of continuity.

Currently the age of presentation is increasing, so it is also possible to witness injuries caused by a fracture of the tunica albuginea in patients with penile prothesis. The injury tends to occur in only one of the corpora cavernosa, but there have been reports of an affectation of both, and even the corpus spongiosum and the distal urethra.

As a part of the clinical presentation, the patient experiences a snapping sound followed by acute pain, and an immediate detumescence of the penis due to the hematoma, They can also present urethrorrhagia, difficulty urinating, or urinary retention. If there is an associated urethral injury: pain when palpating the area of the tear and penile deviation to the side opposite the injury due to the local hematoma. 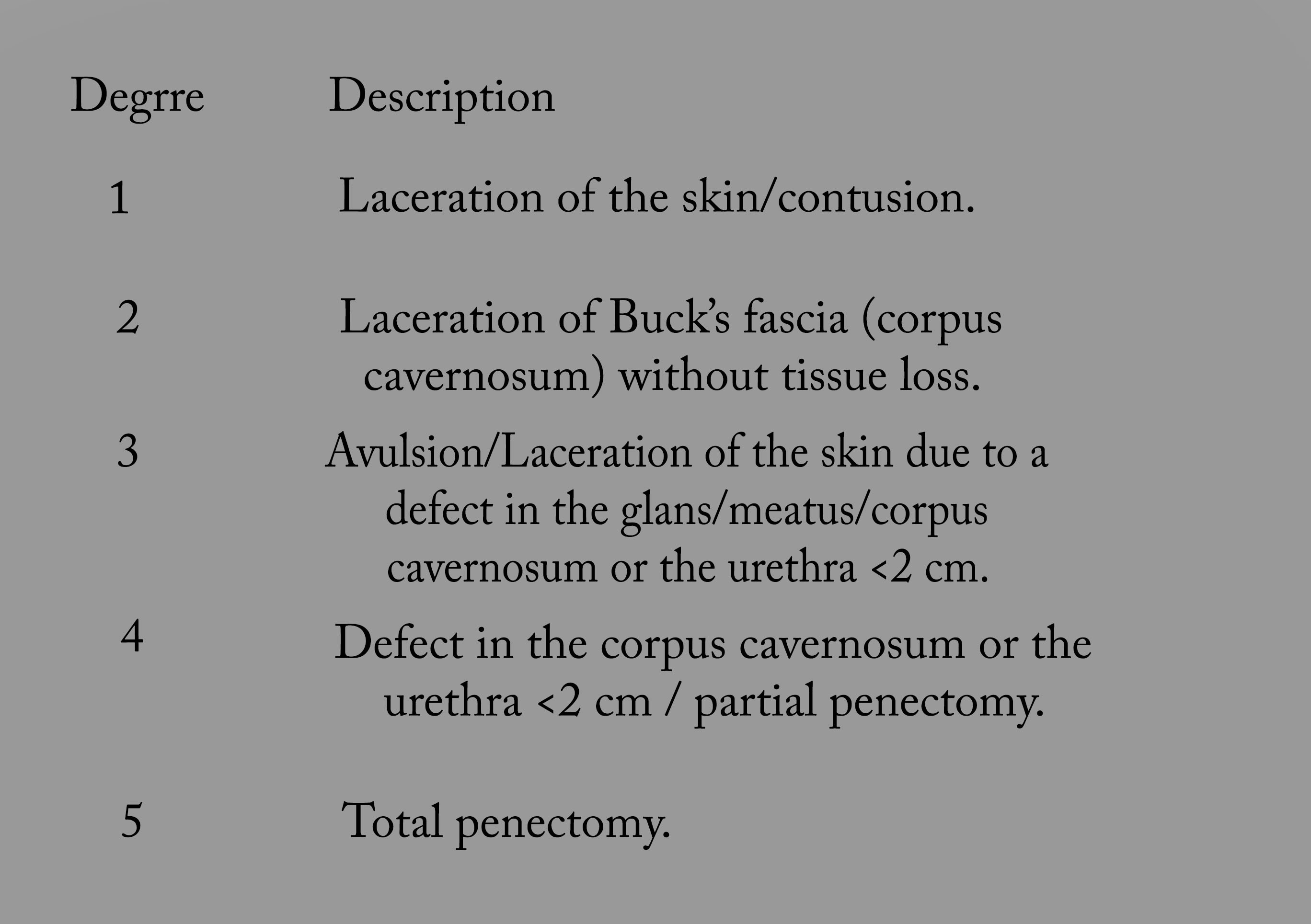 *Taken from the American Association for the Surgery of Trauma.

The basics of diagnosis include genital exploration and the presence the previously described clinical signs. In cases where the fracture is associated with a hemorrhage below Colles fascia, the distribution of the hematoma can surpass the limits of the penis, affecting the scrotum, and even the perineum. The palpation of a hematoma that is limited to the area of the penis is typical of penile hemorrhagic suffusion below an uninjured Buck’s fascia. In cases of penile fracture, there is a characteristic curvature of the penis to the side opposite the injury of Buck’s fascia due to the resulting hematoma.

When suspecting a penile fracture, cavernosography can be of certain use. It is carried out by puncturing the dorsolateral portion of the corpus cavernosum we consider uninjured. However, it can provide false positive results, which is why it’s not advisable to use it routinely. Although it doesn’t detect small injuries easily, Doppler sonography is commonly used as an accessible and non-invasive method. Nuclear Magnetic Resonance imaging has a high rate of sensibility and accuracy when detecting injuries to the corpus cavernosum, but due to its high cost it is not commonly used.

We always have to keep in mind the possibility of a concomitant urethral injury and, in case of a reasonable doubt, carry out a retrograde urethrography to diagnose it.

The treatment is conservative if the contusions and hematomas are small. This includes compressive bandage, antibiotic therapy, and anti-inflammatories. Said treatment extends the patient’s recovery period and worsens the complications and aftereffects. Surgical treatment is considerably superior when the tunica albuginea remains undamaged. It consists of draining the hematoma and suturing the tear.

In case of tear in the albuginea of the corpora cavernosa, one must suture it with interrupted dissolvable stitches. Whenever possible, one must make a circumferential subcoronal incision with posterior sliding of the foreskin towards its base until the whole injured area has been exposed.

The most common complications are the following:

▪️Fibrosis of the corpora cavernosa and erectile dysfunction.

Chief complaint: “Pain in the penis after sexual intecourse”

History of present illness: the patient is a 53 year old male with no known preexisting conditions who visits the urology emergency room due to an increase in the volume of his penis associated with severe pain, which has started 6 hours before following coitus. Additionally, he is unable to urinate and presents urethral bleeding.

Physical examination: Increase of the volume of the external genitals and a penoscrotal hematoma with penis incurvation. One can palpate an increase of volume in the hypogastric region, apparently corresponding to the bladder.

According to the clinical findings and the results of the physical examination, the diagnostic impression is Fracture of the Corpora Cavernosa.

The patient is admitted to the hospital and preoperative blood analysis is ordered, which results came in as follows: Hemoglobin (13 g/dL), Glucose (5.6 mmol/L), Creatinine (110 mmol/L), Blood group and factor O+, bleeding time 3 minutes, clotting time 8 seconds, Thorax X-ray: no pleural-pulmonary alterations, follow-up tests are within the normal parameters. The patient is transferred to the operating room to start surgical treatment.

The patient is received in the operating room. His blood pressure (130/70 mm/Hg), heart rate (89 bpm), and respiratory frequency (14 respirations per minute) are monitored. In preoperatory care: peripheral venous cannulation is performed with a size 14 catheter, hydration with saline solution (NaCl) with infusion rate 60 drops per minute and antibiotic therapy with intravenous Cefazoline (1 gram).

In the operating room balanced general orotracheal anesthesia is administered with previous rapid sequence induction. Next, cystotomy is performed through suprapubic puncture, with previous puncture and derivation. Next, tourniquet is applied to the base of the penis to control the hemorrhage. A circumferential incision is made one centimeter below the balano-preputial furrow on the foreskin with posterior retraction of the skin until the penis is completely bare. The hematic collections are evacuated, and the bleeding vessels are ligated. Surgical exploration finds injuries in both corpora cavernosa with a rupture of 2/3 of the tunica albuginea at the level of the penoscrotal angle, associated with a total urethral dissection. The rupture of both corpora cavernosa is prepared for with previous exposition and joining of the borders with Polyglycolide (DEXON®) 3/0. The urethra is catheterized with a Foley 14 French catheter, the borders are revitalized, and the wound is sutured with VICRYL 4/0. The skin of the penis is moved to its original position. The circumferential incision is closed and covered with a pressure dressing and compressive bandage.

The patient remains hospitalized for 3 days in the Urology department with antibiotic therapy, 1 gram of Cefazoline every 8 hours as a method to prevent urinary sepsis due to the urethrovesical catheter, the complexity of the surgical procedure, and its duration; 75 mg of sodic diclofenac every 12 hours for pain management, and wound care. The patient doesn’t show any signs of local or systemic infection; therefore he is discharged from the hospital with oral antibiotic treatment (500 mg of Cephalexin daily) as a prophylactic measure against infections, wound treatment is indicated to be performed every other day in his health area using saline solution and iodopovidone until the day of the next appointment. The patient remained with the urethrovesical and cystotomy catheters; the latter remained closed until removed 5 days later. The urethrovesical catheter was removed 10 days later.

During the follow- up appointment, scheduled a month later, the patient claims to have a strong urine stream. During his first erection after the surgery he presented a slight penile curvature, but no pain during coitus. The physical examination shows a penis with a surgical scar, with no signs of sepsis. There is no increase in volume nor color changes. The patient is scheduled to have appointments for urethral dilation to prevent urethral stricture, and follow-up appointments to prevent possible complications. 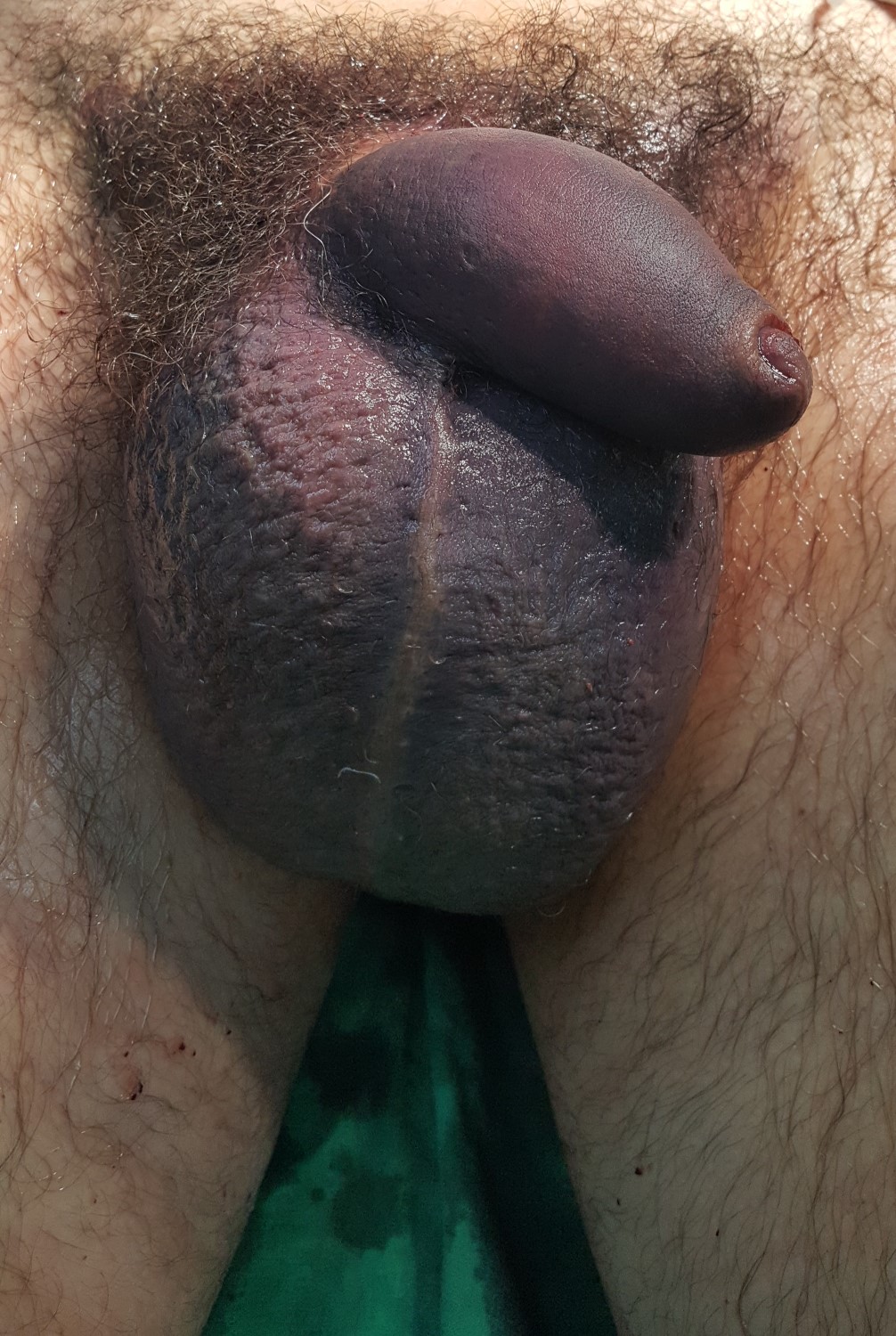 Image 2: Penis, circumcised up to the penoscrotal angle. 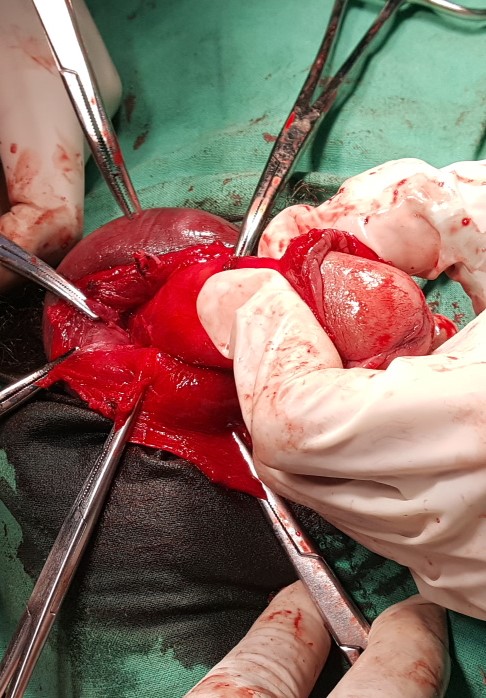 Image 3: Shows large hematoma on the penoscrotal angle, which is easily evacuated. 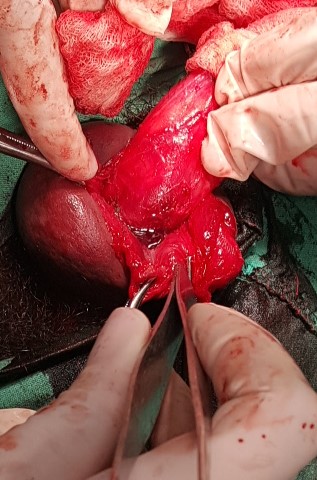 Image 4: Shows breach in continuity of the tunica albuginea of both corpora cavernosa. 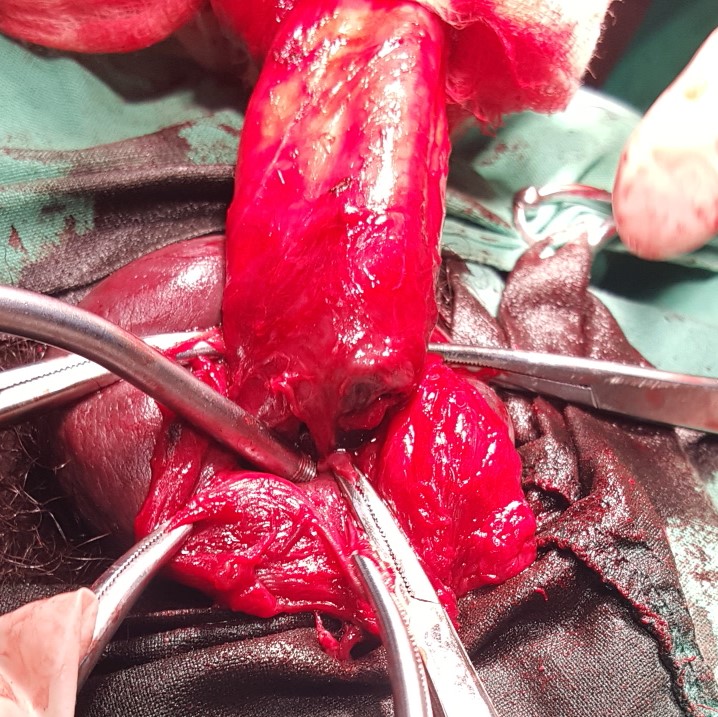 Image 5: Shows both corpora cavernosa dissected together with the urethra. 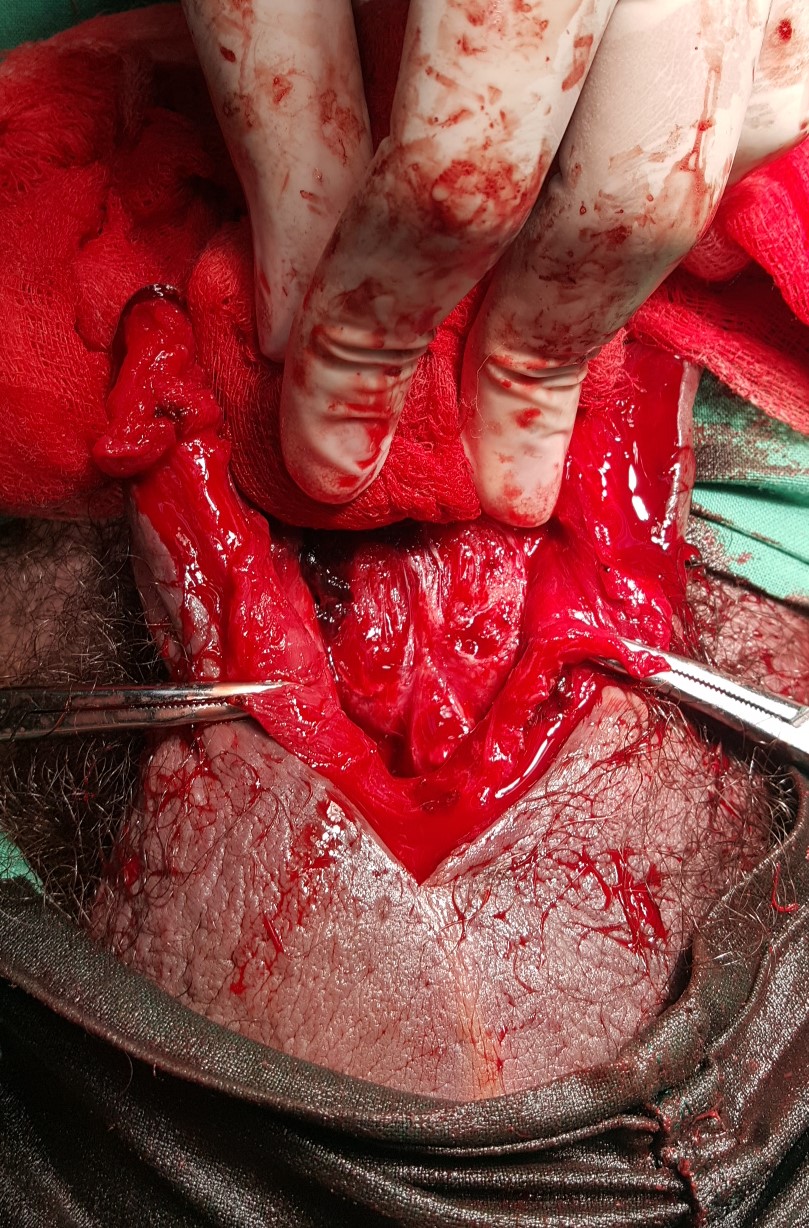 Image 6: The corpora cavernosa are repaired, proceeding to catheterize the urethra to be able to suture it. 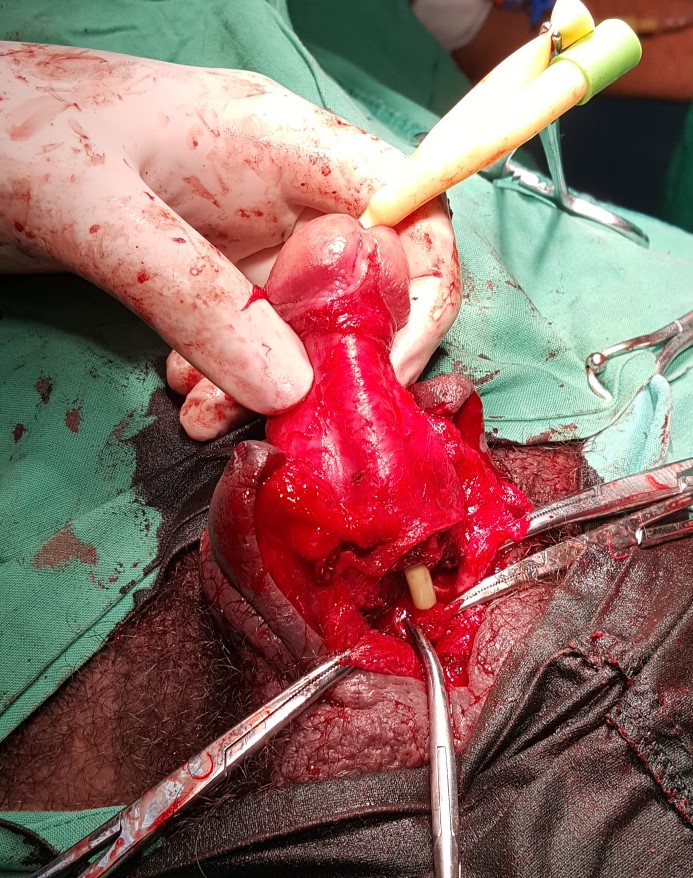 Image 7: Reinsertion of the foreskin into the balano-preputial furrow, showing the change of color of the hemiscrotum posterior to the evacuation of the hematoma.

Stay with us to keep yourself informed. Take care of your health. Start now !!!

An approach to bacterial meningitis 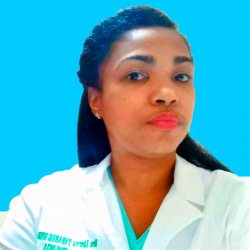 ? Medical graduate from The University of Medical Sciences of Havana (UCM-H).
?Specialist in Urology.